The folks at Category5 TechTV had Jean on the show to talk about turning books into story games, retro games focussed on storytelling, OMSG’s project with Charlaine Harris and the upcoming story games such as Mandatory Upgrade, The Fireside Murders and many more.

http://www.category5.tv/ – they’ve got some great shows – check them out! 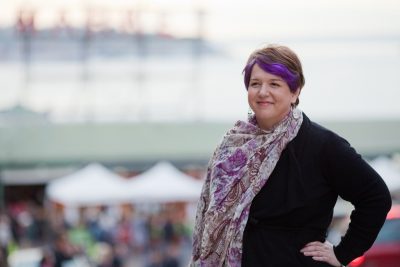 Jean Leggett is co-founder and director of One More Story Games. She is situated in Canada and makes a lot of jokes about dumplings.

This interview took place over Skype.

Kerstin Hall: Let’s start with the basics. When was One More Story Games founded?

Kerstin: How have things been going so far?

Jean: Good. We’ve been bootstrapping the development of our engine this whole time – and we’re now in beta. The engine is only available for PC at the moment, but published games play in browsers, on Facebook, and on Android.

Kerstin: According to your website, at OMSG, story comes first. How do you make this a reality in practical terms?

Jean: Because we’re less focused on the graphics in the game, the focus naturally falls on the story. We’re not about building a platformer or puzzle game like Candy Crush. When you play one of our stories, you’ll see that narrative is central. We work with writers and game devs from all over the world to create story-driven games.

Kerstin: All over the world? Which countries have come up thus far?

Kerstin: That must add such interesting dimensions to the work you publish.

Jean: We’re exceptionally passionate about diversity in games—we want people from many different cultures to share their stories on our platform. For example, I’m hard of hearing and my whole family is deaf. There’s never been a game with deaf characters as the central figures. We’re working to develop a game that is delivered entirely in ASL—American Sign Language. That’s a perspective in games that has never been available to date, but our engine makes it possible.

Kerstin: With the previous answer somewhat pre-empting this, what do you think is lacking in gaming currently, both in the mainstream and more generally?

Jean: Games are the most pervasive they’ve ever been—half of Canadians have played a game in the last four weeks, according to reports—and what’s missing is the diversity and focus on storytelling.

I think that waiting on big studios to deliver diverse stories is a mistake. Look at Hollywood. They’ve been around forever and it’s still very white, very male. Diversity is an issue.

Kerstin: As evidenced by the Oscars. I think there’s more pushback against normative frameworks in general. A productive environment?

Jean: Indeed. And games are an art form. People still think games are exclusively for 17-year-old boys, but the largest segment of consumers are women over 18. Plus, women over 30 are fast becoming the largest consumer base. So we think, based on reports and our own feedback, that women love stories and deserve better than Candy Crush (I’m on level 1494 or something).

I think that when we make tools available to storytellers with diverse backgrounds, we’ll start to see more diverse stories. I watched this great TEDtalk by a woman from the Nigeria. She talked about how, growing up, she read children’s books that were imported from the USA. She never saw Nigerian storybooks and thus never saw her culture represented in books. How tragic is that?

Kerstin: Was that “The Danger of a Single Story?” by Chimamanda Ngozi Adichie?

Talking Comics talks it up with Jean Leggett about storytelling in games, how One More Story Games came to be and the upcoming project with Charlaine Harris.

Are you a creative individual who loves video games and has a story to tell? Well, you’re definitely going to want to listen to this interview featuring Jean Leggett of One More Story Games. As a interactive entertainment publisher on the rise, One More Story Games is the creator of StoryStylus – an intuitive text and visual-based games-developing engine. In addition to having already released several titles using the StoryStylus software, it’s recently been announced that this bold new company has partnered with #1 New York Times Best Selling Author Charlaine Harris to bring her Shakespeare’s Landlord book series to gamers everywhere!

Learn more about the Shakespeare’s Landlord project and how you can get the Storystylus software here at One More Story Games!

During the interview, you’ll learn about the origin of One More Story Games, the projects they’ve recently published, how they came to be partners with Charlaine Harris, and even how you too can create games using the StoryStylus games engine!